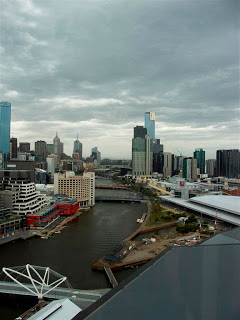 We are all here in Melbourne, a city with tall buildings on a river near the Tasman Sea. It is spring/summer here. Sometimes quite hot, but today half way through the day the wind picked up to cold and cloudy with a smattering of rain, now at suppertime it is cool and sunny.

To begin the week, we all held hands in a circle for a moment. We took time to remember why we are here and to reach back to those who have helped us come to do this work. MotherTongue rehearsed for short time, then Isobel went off to another rehearsal, while Andras went to a board meeting, and the rest of us registered and collected items for the booth EarthSpirit is offering in the exhibition hall. Sue and Deirdre collaborated to create the right presence in booth, which is in a prime location three spots from the entry door.

Chris LaFond met the harpist, Cath Connelly, who is lending him a purple harp for the event. She has just finished a tour of Ireland speaking on Saint Brigit and the Pagan Brigit goddess. 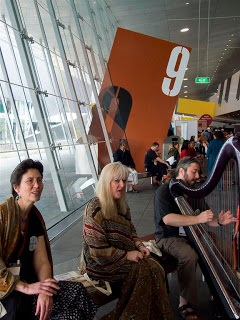 In the early afternoon Chris tuned and played the harp in the registration hall, Kaye and Kate sang and Moira danced to Old Woman. The group attracted the attention of a Parliament journalist who had them do a sound byte of music and some video where Moira announced the Tuesday morning observance by MotherTongue, all done on the journalist’s iphone, which he called old technology.

Next we were off to the Pagan Meet and Greet sponsored by Angie Buchannan and Drake Spaeth. There we met some of the local pagans who are very excited that we are here. The new pagan board member Phyllis Curott was there as well as several other known pagans and wiccans; such as Patrick McCollum, Michael York, Rowan Fairgrove, T. Thorn Coyle, and many more. Picture a small warm room on the 18th floor with many Pagans all excited to be together at this event. 🙂 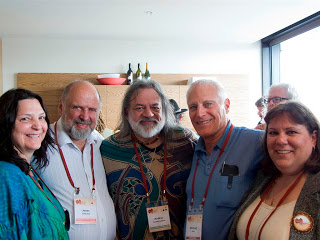 Angie spoke of the reasons why it is so important to do this work and to go to workshops and rituals other than our own. Four rattles made specifically for the event were passed through the group to be energized for gifting to the Parliament Board in Chicago, the Parliament Board in Melbourne, a hereditary Vodoun Priest who traces his heritage back to the 14th century and one to the Dalai Lama. These rattles were made by River Higgenbotham’s sister, a well known potter, who combined pagan symbols with aboriginal symbols specifically for this event.

Andras came in later from the indigenous opening with Jonas Trinkunas, krivis (chief high priest) of Romuva, the pagan religion of Lithuania. Jonas has been to Rites of Spring in 1997, many of us remember him from then.

At the end of the Pagan Meet and Greet MotherTongue sang two songs for the group. They were in good voice and warmly received. the pieces they shared were: Unison in Harmony and Traveler’s Prayer.

Tonight is the opening plenary.