by Sarah Lyn
—
Last May, I stood in a field during a large community ritual, swathed from head to toe in gloves and sunglasses and hat and veil. I was fully protected from the sun. I was standing in the field. That was a feat for me.

Just six months earlier I had been in a freak accident. I had been on fire. I almost died. I almost lost my legs. I was in a coma. I woke up. I have fought every day since for my strides back towards independence.

Strands of a web were rolled out, followed by calls for those who would hold specific energies for the community, both in ritual and in the world-at-large after. These people were invited to come and hold the end of a strand.

They called for those who would hold Fire for the community. I was the most surprised when I stepped forward. One foot in front of the other, I began walking across the field. A few people around me gasped. I understood.

There I was, walking slowly but surely across the field to hold Fire for the community that so tenderly and urgently assisted me and my wife with deep, death-defying healing. I held the strand so that we could build a web of community. For me, it was a physical manifestation of the web of healing energy that had been created for me.

I could hold Fire for them. I had already become it and survived it. 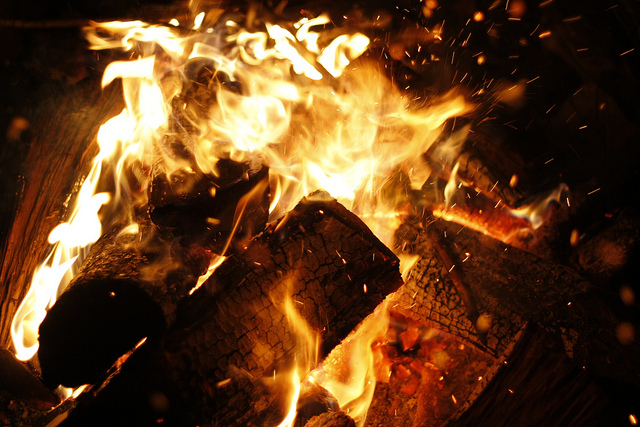 Photo by Trevor Hurlburt, used under a Creative Commons license

I can’t lie, though. As I was walking across the field, even before I held onto that ribbon, I wondered how I would hold it over the course of the coming year. It’s easy to be brave in the moment. How could I hold Fire when I was actively trying to heal from it?

What work would Fire and I do together through the year?

As far as outreach goes, I have been actively promoting and educating about fire safety, even though it was not a factor in my accident. Awareness matters. And I am currently on the search for the first responders who saved me. I want them to see that life exists on the other side of the fire. I want them to see the life they saved. I imagine they don’t always get the chance to see the good outcome. Without them, I wouldn’t be here.

The other work I have been doing with Fire has been simple and personal. I had been partially devoured by the elemental. No one lives through such trauma without fear, but I was determined not to allow that fear to creep into the spaces the fire cleared away.

I am pagan. I do not blame the fire for being fire.

I understand the fear others felt for me, for my life, for my mental health. There was reason for that fear.

But my community used that fear as a catalyst to come together in prayer and healing for me. I felt it. It pulled me out of the darkness I was drowning in. I stepped up to the challenge. I answered fear with love. The speed of my healing was unexplainable. Miracles happened. Not just for me.

Fire devours, but it also ignites. It sparks transformation.

I had to hold myself accountable for being the catalyst for my recovery. If it was going to get better, it had to start with me. Every time I stood up, even though I couldn’t feel my legs beneath me, mattered. Every time I walked an extra lap mattered. Every time I thanked those who were taking care of me, even when they caused me pain, I changed the trajectory of my journey. Every morning I get up and get outside and walk means I will recover.

Many times, in the hospital, the nurses commented about what a supportive community I had. One of my favorites went so far as to say she thought it said a lot about me, that people were so eager to help. But you get out what you put in. You become part of a community by plugging into it, by helping where you see the need. You become a strand of the web.

It was an honor to step up and hold the fire for a community that holds me.
—
Join us in holding this year’s web at Rites of Spring! Online registration is open through May 13.