EarthSpirit recently sponsored a series of performances in Massachusetts and Vermont by Kulgrinda – the ritual performance group of Romuva, which is the name given in modern times to the revived ethnic pagan religion of Lithuania. Jonas Trinkūnas, the krivis (supreme priest) and founder of Romuva – who took part in those performances – is an old friend, someone I’ve known and respected very highly for some twenty years.

Jonas attended Rites of Spring back in the nineties, and I have visited him, his family, and his community in Lithuania. In 2008, when the Parliament of the World’s Religions put me in charge of finding representatives of the indigenous spiritual traditions of Europe to attend the upcoming Parliament in Melbourne, Jonas’ name was the first on my list.

A few days ago, on 6 July, Jonas had the distinction of receiving the prestigious Order of the Grand Duke Gediminas, one of Lithuania’s top civilian honors. The award was personally bestowed by Dalia Grybauskaitė, the president of Lithuania, who praised Jonas for his involvement with the underground resistance against the Soviet regime which ruled Lithuania for over forty years, as well as for his work in preserving traditional Lithuanian religion and literature.

Lithuania was the last country in Europe to officially become Christian – a change which took place mainly for political reasons, and which was not completed until the beginning of the 15th century. The pagan religion co-existed with Christianity for a very long time beyond that, and continued to survive even after Catholicism became dominant and gradually attempted to assimilate and eradicate the remaining pagan practices. But paganism still lived on in the countryside: a large sector of the peasantry, though nominally Catholic, kept alive their traditional pagan spiritually which was deeply ingrained in their everyday lives. A very strong folkloric movement which began in the 18th century helped to keep alive, in the urban centers, an awareness of Lithuania’s pagan roots. 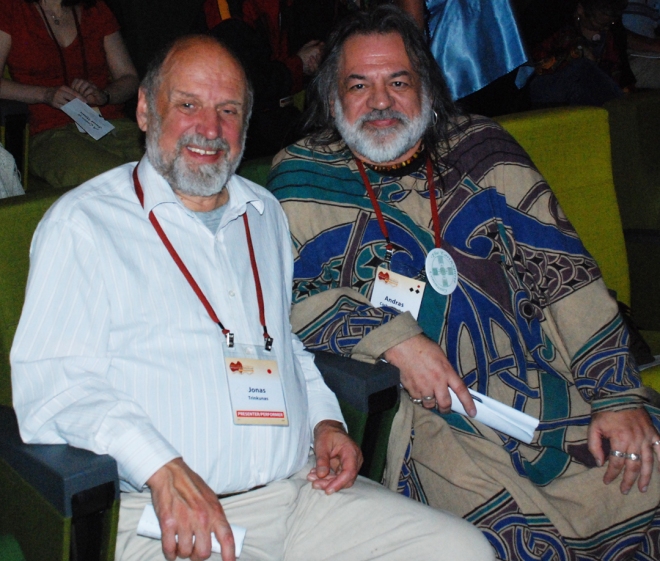 Jonas Trinkūnas immersed himself from an early age in the myths and folklore of his native land, and by the time he’d finished his university studies in the early 1960s, he had published a number of articles as well as a dissertation on pre-Christian Lithuanian religion. He became a researcher and professor of literature and ancient cultures at the University of Vilnius, and during that time he founded a very popular folkloric organization which presented a variety of traditional folk music and dance events; he also began making extended visits to the countryside, to learn directly from rural villagers what still survived of the original pagan traditions.

Jonas’ activities brought him afoul of the Soviet authorities, who feared that his religious and folkloric pursuits were fomenting nationalistic sentiments which could lead to acts of sedition. He was interrogated by the KGB, and subsequently dismissed from his teaching position at the university, and forbidden from holding any kind of teaching job; for many years, he was forced to do various kinds of menial work in order to support his growing family. His folkloric organization was officially suppressed, and he could only engage in his religious practices clandestinely.

Finally, with the loosening of Soviet government controls brought about by glasnost and perestroika in the late eighties, Jonas was able to resume his public activities and to bring Romuva out in the open. Since 1990, when Lithuania achieved its independence from the Soviet Union (the first of the former Soviet republics to do so), Romuva has grown steadily and has achieved a strong presence in Lithuanian culture, though it has not yet managed to gain official government status as a traditional religion.

It may have been an unprecedented event for a pagan leader to be awarded a high honor by the president of his country – it’s certainly something that should make all pagans around the world very proud. Let us hope that the bestowal of the Order of the Grand Duke Gediminas upon Jonas Trinkūnas signals a growing willingness by the Lithuanian government to grant Romuva the official status it has long deserved.

Jonas Trinkūnas and Inija Trinkūnienė with Lithuanian President Dalia Grybauskaitė
and members of the Romuva community at the award ceremony in Vilnius.