by Vince Teachout
—
Rites planning. Bear with me, there eventually is a point.

I have my own personal Dias de Los Muertos ritual that I’ve done for over 15 years. On November 2, I go to a Catholic shrine and light a votive and say prayers for each of my deceased friends or relatives. For the last 4 years, I’ve tried to incorporate adding marigolds to the candle, like they do in Mexico, with slowly increasing success. I only managed to keep a few alive for a vase, until last year.

Last year was my first Rites, and the directions said to “bring something to decorate your tent with.” Naturally, being a dork, my first thought was flowers!

Then I thought of marigolds. Just before leaving, I went by the nursery and bought a flat of marigolds, which I put around my tent and barely kept alive in the heat. I almost tossed them when I left, but brought them home and planted them.

They shot up and put out masses of blooms, and that’s when I thought “Hey, I can use these for Dias de los Muertos, if I can keep the frost from killing them!” Well, a sudden snowfall in November did half of them in, but I dug the rest up and rushed them inside, and for the first time had enough for almost half my family.

In short, I accidentally stumbled on semi-success. I thought it over, and this year will try them in large pots on the porch, which I’ll bring in at mid-October, regardless of what the forecasts predict.

What does all this have to do with Rites? I’m very excited about intentionally starting the process at Village Builders and Rites, in proper pots around my tent this time, carrying them back from Rites, taking some with me when I go to the Ancestor Shrine at Glenwood in October, and then having enough for everyone in November. I’m just really excited that the process will begin at Village Builders.

Here’s a picture from last November. 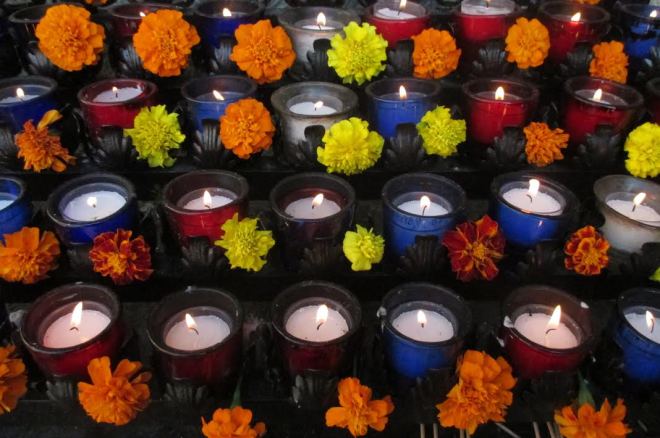 —
Is this the year for you to start a Rites of Spring tradition? Join us! Online registration is open through May 13.