Today about two dozen members of the EarthSpirit community joined approximately 40,000 people to protest against the “free speech” rally on the Boston Common.  Most of us were on the Common near the State House while some of us joined the marchers who marched from Roxbury to the Common.  Happily, our collective numbers overwhelmed both the 30 or so “free speech” folks at the Gazebo and the (at most) 50 or so people who chose to carry racist signs or wear racist clothing in the crowd.

One of the very special things that EarthSpirit has to offer at rallies like this is our singing.  Being able to keep a rhythm and having the right song for the moment helped us to channel some of the crowd’s energy.  When we were at the top of the Common, several people outside our group joined in with us or thanked us afterwards for the songs we offered.  Later, we ran into two folks with a big Flag and some “White United States of America” T-Shirts and we surrounded them and sang to encourage them to make their way out of the Common.

The day was a great success, in the sense that the bad guys were decisively defeated, but it was also a great day because though the majority of the crowd was White, a large percent were People of Color.  When Ken and I were thinking about going to the counterprotest, we were pretty nervous.  When we committed to going, we were not sure how many counter-protesters there would be.  We knew that the chances were small that anything would happen to us, but still, if we were to go, we would be taking a chance that we could have a life-altering injury or worse.  We thought very carefully about our decision, but what decided us was that as White people, we are the ones who can most safely stand up to White Supremacists.  Several People of Color that we talked to in the week before were even more afraid, knowing that they were more likely to be targeted by Nazis and less likely to get police help.  The fact that so many People of Color did show up is a testament to their bravery. 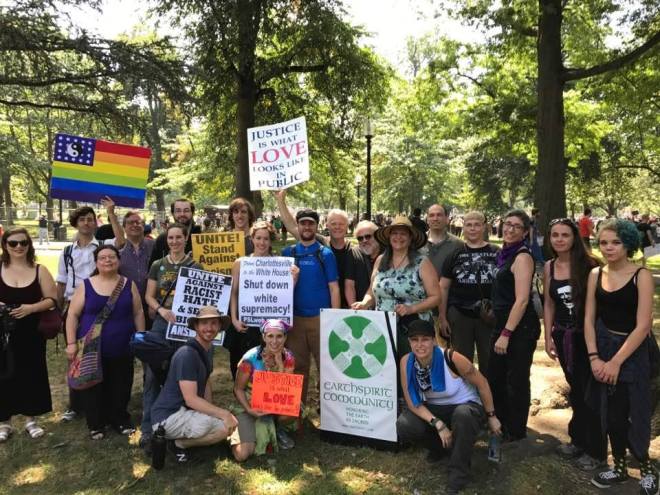 The speakers reminded us that their groups have been fighting racism and racist systems for years, and that they need our help on an on-going basis, and not just after high-profile racist incidents.  A Muslim member of the Cambridge City Council, Nadeem Mazen, reminded us that he and every single Muslim public official lives with regular threats to their person and their family.  A Latina woman reminded us that the reason that there were not more brown faces in the crowd is that many Latinos fear that a chance encounter with the police could cause their family to be torn apart.  A prisoner’s rights organizer reminded us that the prisoners at MCI-Norfolk are drinking lead-tainted water.  They asked us to have their backs on a regular basis, by showing up to smaller protests, to court hearings, and to the State House.  They asked us actively work to dismantle the racism that permeates our society.

As members of EarthSpirit all of us, coming from our different traditions, we have learned to build coalitions with each other in order to create a community that can hold and support all of us in our spiritual work.  On a larger scale, right now, in Massachusetts, religious and ethnic minorities are coming together to create a society that will support all its members.