This past weekend I attended the Old Songs Festival just outside of Albany, NY, as I have done for all but two of the last dozen years. It is a place that feeds my soul. I get to dance and sing, listen to and play music —  and relax, with no performance expectations from anyone. The musicians who come there are, for the most part, people who feel the roots of their music: they study their traditions in great depth and absorb them into their bodies, then exude them in their playing and singing. Their motivation is love — not fame or fortune, but love of music, love of the old ways themselves, love of the people who brought the traditions into being and of those people who carried them on, love of harmony, love of community, love of our species, love of the earth.  Many of the people who perform, organize, and attend have deep and long-held commitments to social justice and to the environment. Many have been political activists for decades. Very few preach. Instead we bask the joy of making music together as we walk through the fairgrounds and feel the satisfaction found in sharing the work of making the world a better place. 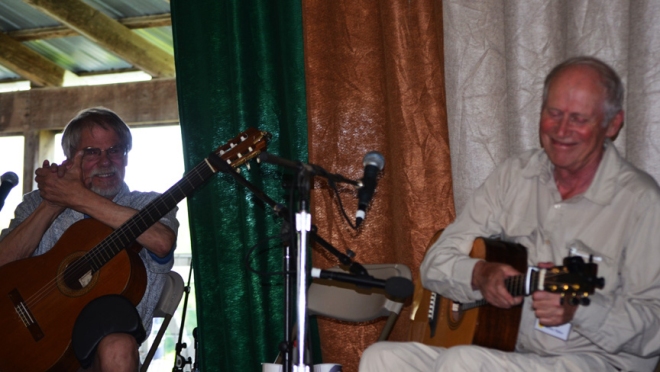 While there were many things that I loved that weekend, there was a song that Gordon Bok performed that especially touched me.  It was something that he had written years ago as a result of listening to the marine radio channel in Maine, which he said he does for entertainment sometimes. It was essentially a conversation between two lobster fishermen. One was stuck and, over the course of the song, the other one came to help. That was it, really.  But something in the way that Gordon captured all of us in the fairly common conversation of two men on the water was just magic to me. There they were, fishermen on the ocean – that vast and moving body of water that cares nothing for people, but still feeds us and gives us life. And here we all are, humans in a universe that is not centered on our needs and desires, but which we must live in and depend on while we are incarnate beings.  We can forget sometimes that we are also floating – maybe near the rocks, maybe out of our depth – and that the simple act of accepting an offer of help allows both us and our neighbors to experience ourselves more fully as the interconnected beings that we are. The song held the magic of knowing, and Gordon shared that knowing with us all.

I find my own path reflected in that community of music makers. I, too, value the roots of my traditions and those who have brought them forward, and I find in the shared songs and dances true expressions of the joy of being human, fully intertwined with all that is creation.

2 thoughts on “On music and roots”